This story features K, a non-binary femme (she/her) and T, a transmasculine person (they/he). Content note for bruising and mentions of choking.

Room 518 was inspired by one of Livvy’s incredibly hot Smutathon stories, Pandemic.

K sat on the plush hotel bed, waiting to hear the lock turn. It was one of those old-fashioned, boutique places that still handed out physical keys instead of using cards or phone apps. Somehow, knowing T would slide that cut brass into the lock whetted K’s appetite even more.

That was one of K’s rules. No first names, at least not right now, not until they could actually get to know each other. She knew herself well. K fell hard and fast, and keeping things as anonymous as possible was her way of trying to keep herself emotionally safe.

K’s other rules were more physical. There would be no meeting for coffee or drinks to get to know each other first, no coming into one another’s homes, no fucking face-to-face, and absolutely no kissing. They agreed to meet at a hotel, booking the room one night in advance and requesting no cleaning service the day before or the day of. K told T she would wait for them naked, clothes in a neat pile on the chair on the corner, and requested that T undress as soon as he entered the room.

Only one thing stayed on: their masks.

Jolted from her reminiscent thoughts about how the hell she found herself splayed naked on a hotel bed in the middle of a pandemic, K heard footsteps approach the door. She held her breath, waiting. And waiting, and waiting, and waiting. Finally, she heard that satisfying turn of the lock, confident that T had made her wait on the edge of her seat on purpose.

T opened the door, coming in tentatively as if to ensure they’d arrived in the right place. Once they saw K, their eyes widened with lust, drinking in the soft curves before him, the dips and peaks of her body creating a landscape T ached to explore. As previously agreed, T wasted no time in disrobing, and K’s cunt throbbed when she saw they followed her instructions to the letter. Kicking his boxers to the side, T untucked their cock, readjusting the posable silicone in a way K could tell would hit her in all the right places.

K asked them to come packing. She wanted to get right down to it, and T knew what they signed up for. K knew how to ride a strap, relishing in rocking her hips and using her hands to explore her partner’s body, but that wasn’t what they had agreed on this time.

There was nothing K loved more than being fucked from behind. Thankfully, in the middle of a pandemic, this suited her. She wanted to be filled. She craved the thickness and the shape of a cock in her cunt, longed to feel another person’s thighs and stomach slam against her ass, their length driving deeper into her with every stroke, the slapping sounds of that seemingly unstoppable force. She dreamt of it. And, touch-starved, she was willing to take the risk.

This wasn’t a meeting of two lovers gently exploring one another’s bodies for the first time. This was a good, old-fashioned fuck with a twist, and they both knew it.

As T approached the bed, K took a moment to admire their physique before turning around. Back arched, fists clenching the comforter, ass backed up to the edge of the bed, her glistening cunt was an invitation.

Out of the corner of her eye, K could see T lean over to squeeze a dollop of lube from the bottle on the nightstand. Looking straight ahead, she felt like she was in some kind of sensory-deprivation tank: now that T had moved back behind her again, she could hear them thoroughly cover the surface of his cock with the lube, slippery sounds mixing with his restrained moans, but she couldn’t see any of it. Soon, silence enveloped them, and again it seemed like T was making her wait on purpose. Fuck.

“Please, I can’t wait any longer. Please.” She hadn’t expected to beg. They both agreed this was just about fucking, but K thought she’d be able to handle the anticipation, the teasing, the unspoken, gentle taunting. Apparently not.

Wordlessly, T gripped K’s thighs and ever-so-slightly slipped the head of his cock inside K’s opening. Weeks ago, once they had negotiated safety protocols, they spent hours sharing what made them the wettest. That first delicious cunt-stretching moment topped K’s list. The act itself—and knowing that T remembered—sent shivers down her spine.

Soon, K pushed herself back onto T’s cock to signal she was ready for more. T wrapped their hands around her thighs as they found their rhythm, K pressing her face into the mattress while they rocked together.

That was another one of K’s rules. T could touch her, but only from the waist down. Eventually, K hoped this would leave T with one option if he held up his end of the bargain—a no-holds-barred, impassioned, deliciously deep fuck—and K waited for their rough, calloused hands to grab her waist and pull her onto his cock over and over, furiously thrusting into her with abandon.

As it was, the sex was delicious, but if K was honest with herself, the touch-starved part of her brain and body needed more, and even the simple act of two deft hands placed in just the right spots would do the trick.

She shouldn’t have worried. As if they had read her mind, T moved their hands from K’s thighs to her waist, increasing the intensity of his strokes at the same time.

T pushed deeper than K thought was possible and she cried out, wetness gushing around his cock.

“Fuck. Yes,” she said between staggered breaths, “but I meant your fingers.”

K and T had negotiated this beforehand, too, sending yes/no/maybe lists to each other. K wanted their dialogue to be minimal, so T knew that when she asked for something, she meant it.

T dug their fingers into K’s hips as she raised her head from the bed, coming up for air to breathe through the exquisite mingling of pain and pleasure. Momentarily returning to reality, K realized she might not have this opportunity again for months. It was time to make the most of it.

“More. More,” she growled. “I want to see the bruises you made for me on my hips, my thighs. I want you to paint galaxies on me with your fingertips. And I want them to last.”

With full permission granted, T released the energy they were holding back. Careful to adhere to their agreements, he took K’s flesh into his own over and over, delighting in being able to touch a lover like this again. It had been far too long, and he was touch-starved, too. Moving their hands over every inch of K’s body below her waist, he found himself in awe of her delicate skin.

Room 518 was written as part of Smutathon 2020, an annual transatlantic fundraising event where sex bloggers and writers write smut for twelve hours for good causes. This year, we’re raising money for Endometriosis UK! I finished and published Room 518 after the 12-hour writing window ended, and we have hit our fundraising goal (!!!), but you can still donate here to support Endometriosis UK’s crucial mission to raise awareness about and support those with endometriosis.

Liked Room 518? Sign up for the formidable feature, my bimonthly newsletter, to get all things Sarah Brynn Holliday and Formidable Femme in your inbox twice a month!

Sarah Brynn Holliday (they/them) is a sexuality writer, speaker, and sex toy company consultant based in Salem, Massachusetts. Sarah is the Spooky-Femme-in-Chief at Formidable Femme where they primarily write about healing, pleasure, and sex after trauma and pushing for ethical, equitable business practice within the sex toy industry. In 2019, Sarah was featured on MTV News and has spoken at numerous colleges across the U.S., including Cornell University. They're thrilled to be part of Smutathon again this year!

Sponsored by BELLESA in 2019 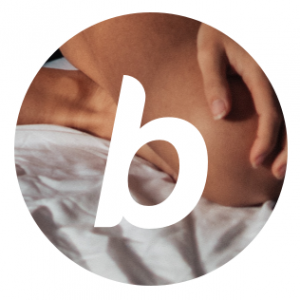