Endometriosis is a condition that affects 1 in 10 people who are assigned female at birth. Despite that, 54% of people don’t know what it is – rising to 74% of men. We want to help change that.

In the run up to Smutathon 2020 on September 26th, we’ll be sharing weekly ‘Endo Stories’, written by other bloggers, authors, and awesome people we found on Twitter. They’ll tell you about their experiences with endometriosis, and about some of the challenges they’ve faced, from diagnosis to treatment, from sexual pleasure (and pain) to fertility and menstruation.

Today’s story comes from Kinky Kitten Kim, a sex blogger and sex toy reviewer writing for Smutathon for the first time. Kim can be found on Twitter @kinkykittenkim, and has her own site which you should definitely check out. If you’re affected by her story, or by the issues discussed in it, please do consider donating to Endometriosis UK to help them help people all over the UK who are struggling with endo.

So… I have Endo. It is very hard to describe just how much it affects me, but for Smutathon 2020 I thought I’d tell you my story, in the hope it might give you at least a little insight into what it’s like living with Endometriosis. Most people who have Endometriosis often get told it can’t be that bad; well, it is! If you know someone with Endo, please check on them. The best thing you can do is be supportive and offer to fetch them a hot water bottle, a Tea/Coffee, and listen.

I started my period at 10 years old. It was always really heavy. I dreaded my period; every month I would be hunched over in the most excruciating pain that I can now describe as very similar to labour contractions. For someone so young to have to endure that pain is awful. I struggled to concentrate at school during lessons through the pains. It was passed off as “woman’s pains” and I was told that I should just “get over it”.

In 2012 I went to the Dr and told them I couldn’t bear any more pain. I was told I had a UTI and that I should come back if it didn’t go away on its own. I duly went back and was told it must be another UTI, and that I had to be checked for STIs. The Dr wouldn’t listen to what I had to say and brushed it off as “Period Pains” even though I was on the contraceptive pill and at that time didn’t have periods. I went back again to be told it was yet another UTI. After the last appointment I just gave up. I was fed up of not being believed and of the Dr telling me my pain didn’t exist; that actually it was me mentally making my period pain more painful than what it was.

I carried on as normal, and thought nothing of taking paracetamol and ibuprofen every day just to feel vaguely ok. At the beginning of 2017 I was putting my baby into the carrier to fetch their sibling from school, when all of a sudden out of nowhere I was crippled over in pain. It felt like a knife was being twisted inside my stomach. I couldn’t move and just had to wait for it to slightly dull. That day I was late for the school run which I ended up doing in agony when I could eventually straighten myself enough to walk. I booked an appointment with my GP the following morning.

A few days later I went to this appointment and once again I was told “Oh you have a UTI”! I was given antibiotics and told to go on my merry way. Three days later I ended up in A&E hunched over in pain at 10pm. I waited 3 hours to be seen, by which point I couldn’t breathe through the pain I was having. I then went in to see the Dr, who told me the UTI hadn’t cleared, then gave me a new prescription advised me to see my GP if it got worse. A week later I went to the GP.

In 2017 my husband and I discussed possibly having another baby: we had our other two quite young and there was a good age gap. I had been on the implant and started having periods that lasted seven days every two weeks, and my pain levels really were getting too much. We discussed having my implant removed in order to start conceiving. However we weren’t very sexually active because I was really struggling with penetration. It didn’t matter how much foreplay we did or how turned on I was, the moment any penetration happened it was like a boulder was blocking my vaginal entrance.  Penetrative sex just wasn’t enjoyable even once I got past that boulder; it was just way too painful, even with lube it was like my vaginal canal just tensed up in pain.

I went back to the GP who ended up being lovely. For the first time someone really listened when I explained how I kept having UTIs, but was also in excruciating pain and having a period every two weeks. They asked if sex was painful so I said yes, I have tried everything I can think of and it’s still too painful. I was then referred to a gynaecologist. My gynaecologist performed an internal examination (which was so painful I had to ask him to stop) and a full STI screen, then told me it could be a number of things. I could have Polycystic Ovaries, or Endometriosis. I was sent for an ultrasound to check my ovaries. I then went to my next Gyno appointment. The Dr said “we have done tests to rule out everything but there’s only one thing it could be … Endometriosis”. Despite their certainty, I was told they had to do an operation to diagnose it officially.

February 2018 at the age of 23 I had my Laparoscopy and was told by the surgeon “we will remove anything if we find it but I promise you will be ok”. I was so scared I was having surgery for nothing and they weren’t going to find anything; that it was just my period pains. Surgery went well, I rested up and was pain free for three months. In May I had my post op appointment. We sat down and my Gynaecologist asked how I was. The next thing he said was “I’m sorry but we did find Endometriosis tissue, I removed what I could”.

My heart sank and I was speechless, nodding and looking at the pictures on the computer screen. I’d had adhesions (cobweb like womb lining that attaches itself to organs and places it shouldn’t be in the body) on my womb and ovaries and just behind my womb. I was told treatment would be hormonal contraceptives to help restrict the regrowth of endo. I then explained I wanted to have a baby, so I was told my best chance to have a baby would be then right after the surgery. 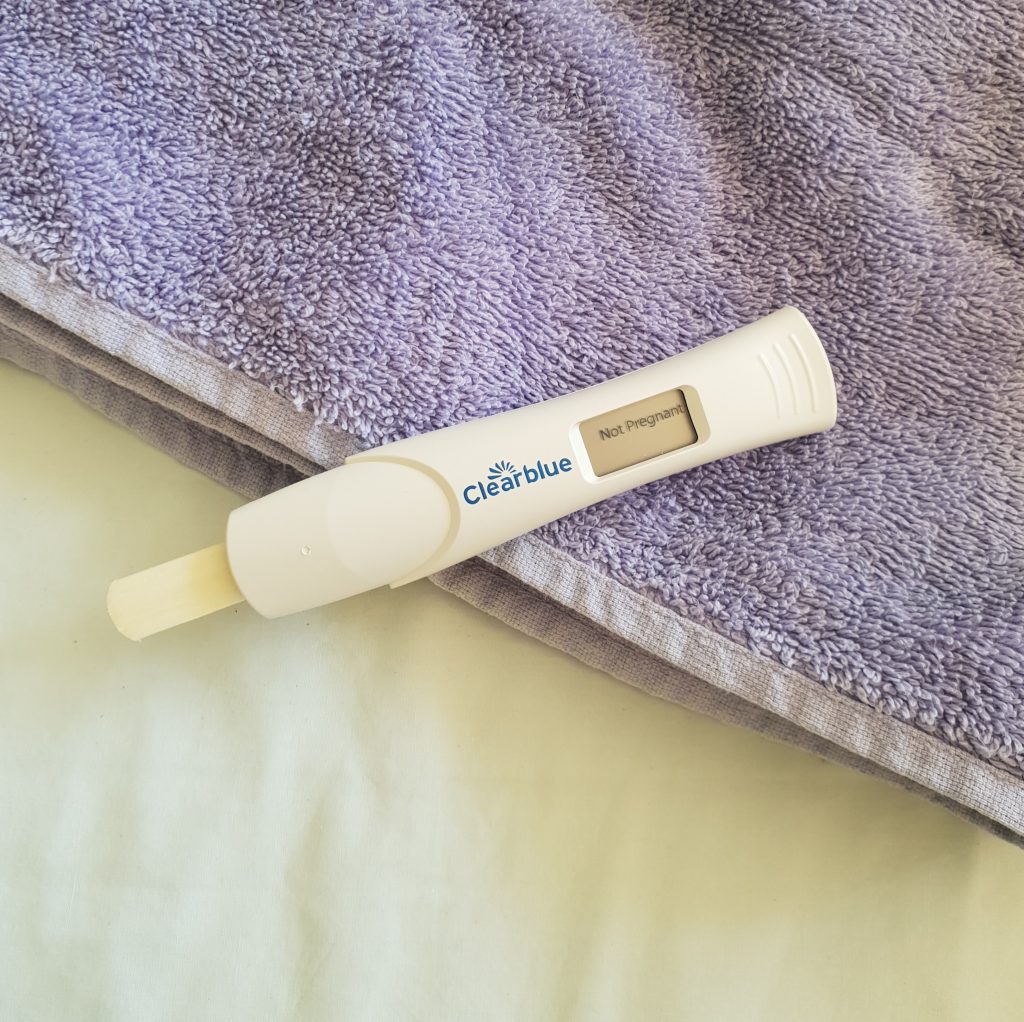 We immediately started to try to conceive. The pain during penetration got a lot better after my surgery and I was able to enjoy it for the first time in what seemed like forever. Every month I would track my ovulation, take pregnancy supplements, and be as healthy as I could. But as each month passed I found myself feeling incredibly low. I weighed up the pros/cons of surrogacy, I started reading up more about fertility and adoption. I wasn’t finished creating our family and I didn’t want Endo to take that from me. What if it was too late? What if I couldn’t conceive? How much would IVF cost? I was ever so grateful for the children I had but I didn’t want my choice taken from me. I had more love to give! My baby who was four at the time kept asking for a baby sibling, and my heart sank each time. We eventually got a positive pregnancy test when I had just about given up all hope. We now have the most precious one year old and I couldn’t be more thankful.

There are still days when a flare will hit me out of nowhere and I feel the burning of my endo. My back, legs and stomach feel like they are on fire. I am not able to take strong painkillers at the moment because I am still nursing so I have to make do with boiling hot baths, heat pads (so hot I end up with burn marks on my belly, which I don’t feel – because my endo pain is all I can feel), paracetamol and ibuprofen. I often have to curl up on the settee or in bed to zone out and just take my mind off the pain.

I have been through labour twice with no pain killers and Endometriosis hurts me a lot more. It doesn’t care where I am or what I’m doing and the pain often goes on for days at a time. Often it is so bad I actually vomit through the pain. I was pain free for three months, but now I am having pretty much the same symptoms as I did before my Laparoscopy: constipation, stomach pain, back pain and heavy periods. My periods currently last eight days and are very heavy.

The difference these days is that I manage my Endo pain a lot better – it is no longer an unknown enemy – and refuse to let it take away my chance at living my life the way I want to. With this horrible disease, it sometimes feels like that’s the best anyone can really do.