“Go downstairs and wait. When we decide, we’ll let you know.”

Maybe all my senses are heightened right now, she thinks. Maybe that’s just how it works. I hope that’s how it works.

They’ve wanted her for so long. Greg and Harry and Jason. Ethan. Anton and Karl. They’ve wanted her on a physical level – for her perfect tits and soft round belly; for the lips she licks nervously whenever she knows they’re staring at her (which is often) – but she’s aware also that they’ve wanted her on some kind of aspirational level too. Aspirational or competitive, she’s not sure. Those lines definitely blur, especially with this group.

She’s a trophy to them, she knows that. Pick any one of a dozen boxes and she ticks it. Older woman. Coach. Mentor. Role model. Traveller. Expert. The guy who fucked her would be the envy of all his team-mates – and it really would be envy, in its purest form. They’d slap him on the back, make dirty jokes, and ask him a thousand questions, but underneath it all they’d wish that he hadn’t been so damn lucky. That she’d picked them.

Perhaps that’s why she did it. She wasn’t bored, after all – she’s never bored – and even though she’s leaving town in a month for another job, another team, she could do that without fucking any of them and never give the whole group a second thought.

But power exerts a complicated hold over her. Not the power merely to fuck them: she knows she has that, and she knows what it does to young men. No, it’s the power to fuck with them that she’s curious about. To see how the group dynamic – those friendships within friendships, that Team Spirit – survives and changes once the envy she generates has wound its way around and through them. Even if she’s not around to see the tiles shift under their feet, she’ll know it’s happening and part of her will always be pleased.

So: an offer. A hand on Greg’s forearm one morning, as he leaves the locker room after training. Greg, a word please. I have a proposal to make.

One of you, and one of you only. Yes, with me. Anything you want – within certain parameters. Fuck me. Use me. Show me just what a hot piece of ass you think I am. Go back and tell the group afterwards. Tell whoever you like – I’ll be gone.

The only catch? You have to decide as a group. And it has to be unanimous. Take as long as you need – draw straws if you like – but everyone signs off on the decision or no-one gets to fuck me. Understood?

She’ll remember the look in Greg’s eye for a long time. Strong, confident, happy-go-lucky Greg. Everyone’s favourite athlete. Briefly a boy again – but a boy nodding vigorously, trying to shake off the uncertainty before it grips hold of him and doesn’t let go. Yes, yes ma’am. Understood.

She ditches her flip-flops on the side of the pool and removes her dress. In the viewing gallery above, she knows they’ll be close to a decision. When she arrived at the gym earlier, Greg was tense, curt. Everyone wants you, he said. But I expect you knew that. We’re going to figure this out now.

Can I watch, she asked. Can I stand there like a prize and see how long you fight over me? He shook his head. I don’t think that’s a good idea.

So she gave nothing away when she joined their team meeting. Here are your training schedules, she said. We’re going to work hard over these next few weeks. I want you all in good shape when I leave. And they stared at their feet, or at the championship banner above the door. Anywhere but her. They shuffled and coughed, until Greg stepped in front of them and asked her to leave.

Now she smooths down her bikini bottoms and stands at the edge of the pool. Briefly, she allows herself to wonder who they’ll choose. Who she wants them to choose.

Harry. Tall and rangy. Takes up less space in the world, somehow, than the other boys. Always with a different woman. She likes his quiet confidence; the prowess he exudes without ever calling attention to it. She doesn’t think they’ll pick him.

Anton. An outsider at first – Erasmus. The best athlete, but reluctant to acknowledge that fact, in case it disrupts a power structure that predated his arrival. Close-cropped hair and thighs she once masturbated over in her car after practice, unable even to drive home until she’d made herself come. She hopes they’ll pick him.

Or maybe Karl. It could well be Karl, she thinks. She isn’t sure how she feels about that. Karl is 22 going on 30. Muscular. Strong-willed. Extremely charming when he wants to be. She saw him naked once in the mirror, as she passed the open locker room door. Saw the shock of black hair between his legs, and that big fucking dick she’s heard so much about from what felt like half the girls’ team. Karl would be simple, she thinks. Logical. And somehow less appealing as a result.

The water parts around her body, as she breaks the surface and dives toward the bottom of the pool. It’s cold – no-one has swum in it today, except for her – and she feels it ripple along her face with each powerful leg-kick.

She emerges 10 metres from the other end, blinking into the overhead lights and shaking water out of her hair. Goosebumps line her forearms, and she knows they’re not caused by the temperature. Blood rushes to her head, making her ears ring. It rushes to her cunt too, but that’s more like a steady wave now; one which started hours before she arrived at the pool. 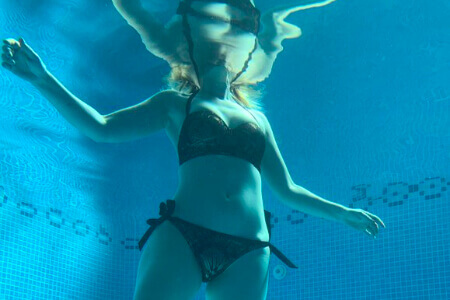 It’s clear to her now that any remaining dissociation has passed. Her clit pulses as she waits. She can feel it swell against the tight fabric, and notes with a shiver of pleasure how much warmer it is than the water around it. She glances up again at the viewing gallery, then her eyes track across to the clock on the wall. It’s 10 minutes since she left the room.

Treading water in the middle of the pool, she feels her breathing get slower, calmer. It’s time, she thinks to herself. I’m ready. And at the other end of the hall, a door opens.